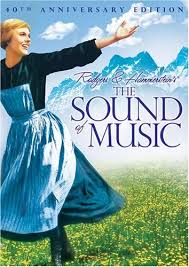 At the Oscars this year The Sound of Music celebrated 50 years.  I love the Sound of Music (I have performed twice in this show, once as Sister Sophia and once as Mother Abbess, and I have also helped with a performance last year with my daughter’s school. By the way, Rose also had the role of Sister Sophia). The music is simple but beautifully arranged and I like to use the pieces My favourite things and Do re mi when I begin young students with singing lessons.
It was an interesting decision that was made at the Oscars to allow Lady GaGa to perform a medley of the songs.  No one would think that this was her style of music.
Lady GaGa did train classically, but went another way obviously with her outrageous style of music and persona. However, I would have to say that she did a wonderful performance at the Oscars. Very tastefully dressed and she performed the songs with confidence and style.  Apparently she practiced every day for six months for this gig. (makes you realise it never ends, even for professional singers).
I have posted a video of the performance for you to have a look at.   What is your opinion?
I would be interested to know what you think.